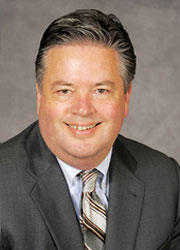 David Schumacher was appointed director of the Office of Financial Management (OFM) by Governor Jay Inslee in January 2013.  He has 20 years of experience in budgeting and policy development.

David joins the Inslee administration after spending the past two years as staff director for the Senate Ways & Means Committee.  He held the same position from 2003 to 2008 before serving two years as northwest government affairs director for The Boeing Company.

David began his state career in 1990, working as an economic analyst for the state Department of Revenue for three years.  He then worked for two years as a revenue analyst in OFM’s Forecasting Division.  He served as a budget analyst for the Senate Ways & Means Committee for eight years before being named staff director in 2003.

David holds bachelor’s and master’s degrees in economics from the University of Washington.  He and his wife, Katy, have two sons and live in Olympia.