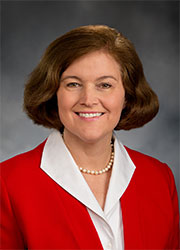 Sen. Christine Rolfes represents the 23rd Legislative District, which includes including the Kitsap County communities of Hansville, Kingston, Poulsbo, Bainbridge Island, Keyport, Silverdale, and East Bremerton. Since her election to the state House of Representatives in 2006, Christine has become a leading voice on education funding and reform, small businesses, ferries, military-families and veterans, and the environment. Her efforts have yielded tangible results for the 23rd district and Washington State as a whole.

She chairs the Senate Ways and Means Committee, responsible for leading the development of the state’s $52 billion biennial budget. Under her leadership the legislature has, for the past two legislative sessions, delivered a four-year balanced budget on-time, with billions set aside in strategic reserves and historic investments in environmental restoration and public education. In August of 2019, the state’s bond ratings were upgraded by Moody’s Investor Services to Aaa for the first time, due primarily to sound fiscal practices and a diversified and strong economy.

In addition to her current work as budget leader, Christine has long been an environmental champion, sponsoring legislation related to reducing toxic pollution, protecting orca whales and other endangered species, cleaning up Puget Sound, and preventing oil spills. She was a key partner in the preservation of thousands of acres of working forests and recreational lands near Port Gamble.  She currently serves on the Senate Agriculture and Natural Resources Committee.

Christine also serves on the Governor’s Council of Economic Advisors, the Advisory Board of the William D. Ruckelhaus Center, and the Puget Sound Partnership’s Ecosystem Coordination Board.

Prior to being elected to the State Legislature, Christine was twice elected to the Bainbridge Island City Council, where she led on non-motorized transportation, water access, and open space preservation-related issues.

In addition to her elected public service, she has worked for the U.S. Agency for International Development on natural resource management, trade and development issues, primarily in Russia, and for Kitsap County acquiring open-space and parkland and planning under growth management.

She and her husband Leonard raised their now college-aged daughters in an historic farmhouse on Bainbridge Island, where the family still lives with their two goats, six chickens, and indoor pet rabbit.