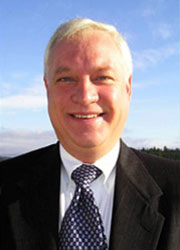 Bret Bertolin has been with the Economic and Revenue Forecast Council (ERFC) since its inception in 1984. The ERFC is charged with preparing economic analyses and revenue forecasts for the Governor and the Legislature.

Prior to joining the Forecast Council, he worked as an Economist with Seattle-First National Bank.

When he is not crunching numbers, Bret enjoys hanging out on his sailboat with his wife and daughter.

Bret received both his Bachelor’s and Master’s degrees in economics from Yale University.