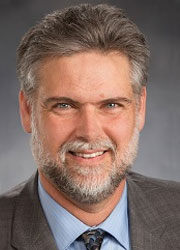 Ed Orcutt was appointed to the Washington House of Representatives in 2002. From 2002-2013 he represented the 18th District. Due to redistricting Ed now represents the 20th District, and is currently serving his seventh full term.

Focused on creating new economic opportunities, Ed is a strong voice for a less costly and more accountable state government. He is leading the drive to improve transportation policy, protect taxpayers, and encourage the growth of small business.  Ed is the ranking member on the Transportation Committee, assistant ranking on Finance and a member of the Agriculture and Natural Resources Committee.

Ed received an associate degree in science from the University of Maine in 1984, then went on to earn his Bachelor of Science in Forest Management from the University of Idaho in 1987. He has made a living as a forestry consultant since 1990. In 2009 he became the owner of his own consulting company. An advocate for protecting our natural resource industries and quality of life, his experience as a business owner in the private sector – paying taxes and dealing with government red tape – prepared him well to help reform the public sector.

Ed is an active community volunteer, and past president and member of his local area Lions club. He served as chairman of the Highlander Festival, as a member of the Columbia Theatre Board, and as a youth bowling coach.

Ed and his wife, Marcie, have been married since 1996 and make their home in Kalama, Washington.