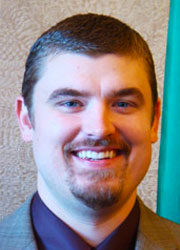 Lance Carey is a senior economist with Washington State’s Economic and Revenue Forecast Council. The Council is responsible for quarterly forecasts of the state’s economy and revenue collection. Prior to this, until early 2008, he was employed as an economist with the Washington State Employment Security Department.

At the forecast council in addition to the quarterly forecasts, Lance is also responsible for producing the Annual Washington State Economic Climate Study which tracks the state’s competitiveness relative to other states according to several benchmarks.

During deer hunting season, if he is not staring at a spreadsheet, Lance can be found knee deep in mud looking for deer. Fortunately, he is a better forecaster than a hunter!

Lance graduated from Central Washington University with degrees in Economics and Finance in 2004. He lives in Olympia with his wife and three children.